From the Evening Sentinel

From the little dry goods store of Samuel H. Brush in 1858 to the Howard & Barber of 1958 is a century in time, and more than a century of change. Yet that little store on lower Main Street in the Borough of Birmingham was the start of a business that has continued for a hundred years.

Samuel H. Brush, born in Smithtown, Long Island, New York on August 10, 1835, is said to have started out in business as a peddler. He tired of travel early since he opened a little dry goods store in Birmingham in 1858. The exact location is not known. But evidently the business prospered, since in February, 1860, he leased from Henry Atwater the two stories under the Globe House for the magnificent sum of $200 per year. A year later he moved up Main Street to the Birdseye Building on the north side of Main Street between Caroline and Main Streets.

The early store carried little of the types of merchandise of today. Listed were silks from France, 18" wide, Atlantic muslin, tinware, and we do mean tin, a little domestic and imported wallpapers, heavy fabrics for cloaks and suits, and some novelties. "Brush's Cash Store" in the first advertisement found says -

In March of 1869 "Brush's Cash Store" was removed from 101 Main Street to the top of the hill location occupied previously by Lyon Bros. & Co. This is also where the Derby Transcript was published.

Samuel Brush built the spacious home at 166 Minerva Street, Derby now the residence of Dr. W. H. Treat. The exterior of the home was completed, but before the interior could be completed there came the stock market crash of that period and Samuel Brush was not able to complete the home. He sold the unfinished home to Dr. Treat's grandfather, Lyman L. Loomer and that transaction called for a certain amount of cash plus the stone house at the corner of Minerva Street at Third.

He was married to an Elizabeth Curtiss and there were three daughters. Two daughters died as infants. The third grew to maturity and married to a new doctor who had moved into the area, Dr. Richardson. They had one son, Henry B. Richardson who had attended the local schools and graduated from Yale in 1906. He resides in New Haven and is a professor of French languages at Yale.

Mr. Brush died on Sept. 28, 1876 at the age of 42 after 18 years in business in Birmingham. His death resulted from an unusual accident. He was riding with a lady in a carriage. It started to rain, so he stood up to cover the lady with a raincoat. He fell from the carriage, and the resulting injuries causing his death some days later. He was a Mason and Odd Fellow. Mr. Brush is buried in Oak Cliff Cemetery with his wife and infant daughters.

The Derby Transcript, original weekly newspaper in the Valley, carried the following news item in its issue of Dec. 14th, 1876. "Mr. Charles B. Boothe, who has purchased the stock of goods remaining at the old stand of the late Mr. S. H. Brush, is hard at work with the administrators of the estate, in inventorying the same, and purposed to reopen the establishment for business on Saturday of this week if possible, failing on that, on the Monday or Tuesday following. Mr. Boothe will open with a large and varied assortment dry goods fresh from the market, which together with the old stock on hand, will be sold at the very lowest possible prices and strictly for cash. His advertisement will appear next week. Mr. Dibble, Mr. Haskell and Miss Dunham will remain with Mr. Boothe, and the old established reputation of this noted stand is to be fully maintained".

Mr. Boothe's first ad as run in the Transcript was as follows:

To the People
of
Birmingham, Ansonia
and adjoining towns
C. B. BOOTHE
Has taken the popular and
reliable Dry Goods Store, known as
"BRUSH'S CASH STORE"
and is now thoroughly restocking it
with new and desirable goods.
New goods are constantly being
received.
Goods marked in plain figures.
"Goods, goods at low prices for
Cash"
One Price

A feature on the Dec. 21, 1876 in the Derby Transcript under the heading "Among the Shops" says "Next to this store, the store of our departed friend and brother S. H. Brush, whose virtues are remembered, yet whose place is just taken by C. B. Boothe. Success to this successor. He brings with him a good reputation and we trust the old store may live to 'buzz' again like the busy 'hive' it was under the departed.

Mr. Boothe was successful enough so another move was in order. When the original Howard & Barber building was finished in 1877, built by A. H. and C. B. Alling he moved again. He continued in business at that location until 1883 when he decided to retire.

He advertised the business for sale in a Boston paper and "posted" it with the Boston Wholesalers. The ad came to the attention of two young men from Milford, New Hampshire, George E. Barber and Charles R. Howard. They came to Birmingham, looked over the store and checked its figures. Since they had little money, they went back to think it over. A month later, on December 23, 1883 they came to an agreement with Mr. Boothe, they to take over sometime about February 1, 1884.

After paying all the cash the two partners could scrape up, and signing notes for the balance to Mr. Boothe, they still had to have new merchandise for the opening. Mr. Barber went to the two wholesale centers, Boston and New York, explained the situation and asked for additional credit. He was surprisingly successful so Howard and Barber was successfully launched.

Prices were really low in those days. While it was some years after they started, Howard & Barber's ad from the files of the Sentinel on April 3, 1898 is typical. They included: Gingham, four and a half cents a yard; kids gloves, sixty-nine cents; women's hosiery, seven to nineteen cents a pair; dining room table, six leg, with six foot extension, five dollars; three piece chamber suit, nine dollars and a half; brass trimmed beds, three dollars and a half; five piece embroidered velour, upholstered mahogany finish frame parlor suite, twenty-five dollars; and corduroy covered couches, five dollars to seven and a half. Illustrations were seldom used and usually the same for several days running.

With the rapid spread of the lower Naugatuck valley in those early years of partnership, the business likewise expanded rapidly. By the time of the completion of the Board of Trade Building to the west, also built by A. H. & C. B. Alling, in 1891, physical expansion was indicated. So arrangements were made to lease the main and lower floors in the new building. This, like the original building, had three floors below the main floor.

At that time a corporation was formed by the partners to operate a separate business specializing in furniture and floor coverings. At this time another young man, Frederick F. Abbot, also a former resident of Milford, New Hampshire, joined the company. Mr. Abbot, long active in civic affairs in the communities, soon became secretary of the new corporation.

This was only the first expansion. Not long afterward, the need for more space became evident. So when in 1900 the Allings decided to put up a storehouse in the rear of 250-260 Main Street, two more floors were added and these two floors connected with the original store. In the spring of 1901 the new fashion floor and lower floor of domestics, linens, and fabrics was opened.

The first break in the ranks came in 1898 with the death of Mr. Howard. At that time, the partnership of Howard & Barber and The Howard and Barber Company were merged into one corporation. In 1902 Mr. Barber assumed the management of the Star Pin Co., though he remained active as president, director, and advisor of The Howard & Barber Co. until his death in 1941. With the diversion of Mr. Barber's activities, Charles A. Cock, who had been in business in Ansonia until being burned out, came to Howard & Barber "temporarily" to help out. The temporary association lasted almost fifty-five years, until Mr. Cock's death in 1956.

Later expansion included moving into a new building put up in 1913 to the west of the Board of Trade building, again the main and lower floors being occupied by Howard & Barber. This brought the area occupied to over 30,000 square feet, ample for any future expansion.

In 1939, Arthur M. Reed came to the store as general manager. Miss Barber became president of the Company upon the death of her father in 1941. During the next ten years the physical layout of the store and the fixtures were all changed, the modernization including a change from the mahogany of the early 1900s to the light maple of today.

In 1955 Richard M. Bollinger joined the company as merchandise manager of furniture, floor coverings, and housewares. At that time, Miss Barber asked to be relieved as president and Mr. Reed was elected to that office. Present officers include Mr. Reed as president and treasurer, Mr. Bollinger as secretary, Mrs. Pearl F. Rourke as assistant secretary, and John T. O'Keefe as store manager.

Now Howard & Barber is celebrating its Centennial Year. Many events have been planned. The famous brand manufacturers whose merchandise Howard & Barber sells have cooperated to start the event tomorrow, the biggest in the local department store's history. There will be outstanding features in all twenty-seven of the store's departments with unadvertised items in all.

The staff of Howard & Barber's in 1884. In the photo are Joe Martin, John Hawkins, Nona Roche, Minnie Nettleton, Lucius Curtis, "Lou" Bassett, Lizzie Dunham, Virginia Brisbois, Fanny Wilbur, and Lizzie Pitcarin. In the windows at left are curtains and drapes. Rugs and matting are displayed in the window at the right. Over the entranceway is a suspended gas light with a display case below it. At lower right is the entrance to a barbershop in the basement of the store. Sign hung sideways on pillar at entrance right advises the tenancy of the dentist upstairs. 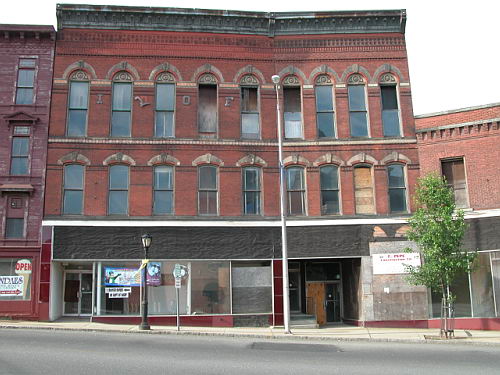 The Howard & Barber buildings prior to their demolition in 2005